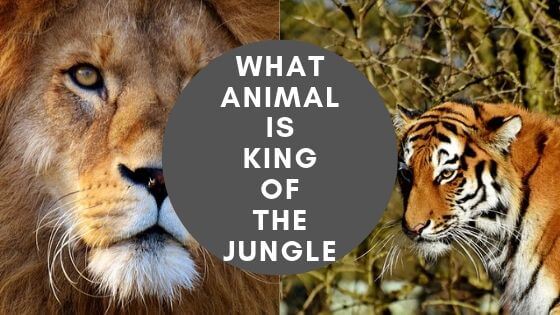 Ever since I was a tiny kid, I was told that the king of the jungle is a Lion. But lions don’t even live anywhere near the jungle. Lion’s natural habitat is the open savanna when they are hunting gazelles and zebras.

So who is the real king of the jungle

If there is any animal that most experts will agree that is the rightful king of the jungle, it would be an elephant. Not only that, lions, who are usually represented as crowned kings of the jungle, even though they are not. They are merely afraid of adult elephants. The only attacks by lions on elephants are on the younger ones, and only if they are away from the elephant herd.

But on the other hand, elephants attack or a maybe better word would be scare lions quite frequently. Especially if they are near water and elephant would like to go there. They chase lions for a good minute. And the lion is running scared for his life. But lions most of the time get away quite quickly since they can run up to 35 miles per hour. But sometimes they get trapped and then it is game over for lion. If there is no other way to get out, they try to attack the elephant. And so far, I have never seen or not even read that one lion would be able to kill a healthy adult elephant in most cases. But that does not mean that the elephant is the ultimate king. It probably is, but there is one more animal that should be in the run for this throne of the jungle kingdom. I will discuss that at the end of this article.

Yes, they can. But they don’t usually do it. And when they do, it is because it is life and death situation, other than that, they are scared of them. And even when the lion attacks an adult elephant, the lion is not alone. In some documentaries, there are also over 20 lions who are attacking the lonely adult elephant.

The natural habitat for both lion and elephant is a savannah. Where these attacks, which I have described occurred. But elephants can also be found in the jungle. And rightfully so, they are the animal king of the jungle! Even though these animals are relatively gentle, but due to their size and bulk are feared.

Why is lion considered as the king of all animals

It is quite weird, because if you would spend a whole day watching a lion. You will find out that it is quite a lazy animal. They rest up to 20 hours each day. Especially in comparison to other animals, who live in jungle-like tigers, elephants, crocodiles, hippos, and rhinos.

Why the lion is not the king of the jungle

There are other reasons for this than just that they do not naturally live in the jungle. But lions are quite scared of elephants and rhinoceros. And they are also quite afraid of tigers.

But in a way, lions will always be kings

The lifestyle of a lion is truly king-like. They rest for almost a whole day. On average, they spend at least 16-hour resting, and in some cases, they sleep for more than 20 hours a day. They are almost fearless and widely feared — kind of king like life.

What another animal could be other than an elephant

There is an excellent case to be made about tigers. Because not only, that they are physically bigger, stronger, and faster than lions. They also have bigger brains. Their brain is, on average, by whole 16% larger than the average brain of the lion.

Please promise me one thing. If you ever occur in conversation about what animals are king of the jungle, please don’t say a lion. And if someone does say that, please correct them. I thought the same almost to my mid-20s when I found out that it doesn’t even make sense because lions do not live in the jungle.