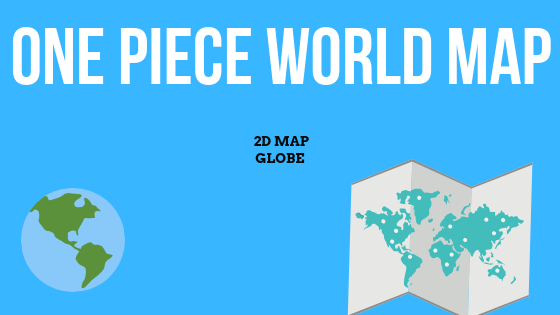 I have received so many requests to share with you One Piece world map and globe. And I finally found both of these for you. It took me a while to found 2d map with enough quality, so you can zoom in and so on, but I have finally found it, so here it is. Only one last thing I would like to add, the colors of the ilands and the ilands itself are not 1:1, but I am trying my best to find someone who could draw the map 1:1. So far, I haven’t found any freelancer, which would be able to do this, unfortunately.

What can you find on One Piece Map 2D

Map Of One Piece

Explanations for One Piece Globe Map

You need to read this first before you take a look at the globe. If not, you won’t know what is in front of the globe and what is on the backside of the globe.

Geographically One Piece World consist of

The Blue Sea pretty much makes the whole world. The blue sea is one large continent, where there are several islands, creating one long chain of islands. There are two large oceans, which are made by four seas. The continent goes by name Red Line. The one long chain of islands goes by the name the Grand Line. The seas are named by geolocation, so north blue sea, south blue sea, east blue sea, and west blue sea. There is going to be one more sea in the future because we know about it, but there is still an unknown location for it. And this last sea is known by name All Blue sea, where the other four seas flow into.

In each sea, travel is the same as in real life. Traveling to a destination is quite easy; you will need only a regular compass for it. But traveling from one sea to another is quite challenging. Not only that, Red Line is separating two oceans, but the grand line also separates the seas.

Grand Line is the destination of all pirates because the compasses don’t work around here. And quite a lot of story is on the Grand Line. The grand line is separated into two halves by the red line. One half is called Paradise, and the second half is called the New World. Where Paradise is self-explanatory. The New World is a perilous and challenging place where the Yonko is an unofficial ruler of the New World.

Grand Line is surrounded on sides by the calm belt sea. There are no winds or things like that, so there goes the name Calm Belt. Sailing through this area is extremely hard and also quite dangerous due to Sea Kings who are “nesting” there.

The Red Line is the only continent of the One Piece world. The red line continues from north to south. If there were no red lines, there would not be two oceans split into four and small seas. The red line is used to travel in the grand line to either Paradise or the new world.

As I have said before, the Sky Ocean has an unknown location, and it is mostly referred to as a Blue Sea. The sky ocean is made out of clouds, but these are not just regular clouds. There are two main kinds of clouds. Sea clouds and Island Clouds. Sea Clouds are precisely the same as water, you can sail on them, but only if the ship is not as heavy to sink through the sky clouds. And Island Clouds are dense and heavy, and they can carry almost anything.

How to get to the sky ocean?

There are several ways how to get in Sky Ocean. But so far, we only know about one way, which is not exactly an easy one. To sail in the sky ocean, sailors need to take Knock Up Stream. There should be a more natural way to go there via High West way, but so far, no one figured this one out. Once someone travels into Sky Ocean, he has then chosen to go to the White Sea and White White Sea.

Self-explanatory, but yes, this is the bottom of both oceans. Even though there is no oxygen and extreme water pressure, there are four locations.

Moon is often seen able during the night, where it orbits the world. And of course, it is not visible on the map.

The world is enormous, if you don’t think so, think about it again. There are more than eight hundred chapters. If that was not enough, each arc takes part in a different piece of the world. I would bet my house that the world of One Piece is massive. It is hard to imagine how this world looks, or at least it was for me, and I have read and also watched the series. This is why I have tried to found the best One Piece map. Hopefully, what I have shared with you today was good enough, and it is going to help you with your imagination, and you will, from now on, better understand to One Piece.