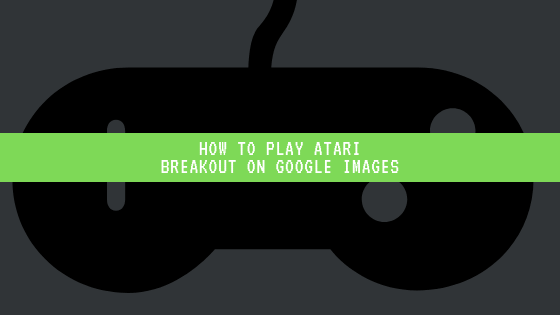 Google has surprised us again with the Atari Breakout game, which can be launched from Google image search. I am going to show you step by step [screenshto by screenshot] how to do it. And this is not the first time that Google did something like this. In the past, they have surprised us with another hidden game, where they were hidden easter eggs — no more hiding secret google games. I am going to expose all of them to you!

How to Play Atari Breakout on Google Images

I am going to show you how you can play this awesome hidden game, which some people refer to as easter eggs in just five easy steps.

If this was to brief for you, I am now going to post a detailed tutorial with step by step images and comments, how you can play this video game.

First, I need you to open a web browser. As I have mentioned before, my choice is Google Chrome, but pretty much any internet browser will work. So use whatever you like or have on your computer or mac. You can also use Firefox, Internet Explorer, Safari, and even the new Microsoft Edge. I am sure that Opera will also work for this.

Now, as you can see, I am in incognito mode. This is not mandatory. But for those of you who are trying to play this at work or school. You don’t need to search for Atari Breakout unblocked, use incognito mode on your browser. Also, if you want to play this game at school or work, disable sound. Because the game automatically starts once it is loaded and it has sounds, once you disable them, you can turn volume up on your computer.

In the third step, you are going to search on google this term “Atari Breakout.” Please check it once or twice if you have used this exact spelling, obviously without “”. But if you proceed with incorrect spelling, it won’t work!

Now the results provided by google are not impressive; what you want to do is switch from all results. To just results from images.

Now depending on your internet speed and your browser. It will take a second or a few to load the game. You should see that the images are creating blocks in the game once the bar with a ball appears underneath the blocks. It is fully loaded, and the game will start right away. With a sound as I have mentioned before, so again, if you are at work or school, turn the volume to 0. Then disable sounds in the game, and you can set the amount back to the original value.

Hopefully, this has answered your question of how do you play Breakout on Google image search. If you don’t know how to control the bar, keep reading this article, I have shared controls for desktop and mac users and also controls for mobile users/players.

Can I play Atari Breakout on a mobile phone?

I have been asked this question a lot after publishing this tutorial, so I have edited this in. Yes, you can. Depending if you have iPhone or Android phone, it might not start automatically. But if you switch your browser to show websites as if you were on desktop, it will work for those of you who do not know how to do this. I will post step by step screenshots on how to do it.

First, you need to open a mobile web browser.

It does not matter which one. But again, my favorite mobile browser app is Google chrome.

As you can see from the screenshot, I have already opened my browser. I am in incognito mode, but you don’t have to do that. Now you need to open browser settings.

Now in browser settings, you need to choose open as “desktop site.” If you don’t set this option on, it won’t work. If your browser does not have this feature, please go either to iTunes or Google Play Store, depending on your phone and get Google Chrome app because it works n 100% of the time in this browser.

Now, google the term “Atari Breakout,” before you hit enter to get the search results. Double-check if you spelled this search term correctly because if not, it won’t work. And of course, search it without “.”

After you hit enter, Google will show you all results. But we need to go to images.

Now you should see images slowly forming to block and bar with a ball should appear underneath the blocks.

The game starts automatically, so be ready. If you do not know how to control the bar, keep reading the article, down below, I have shared controls for mobile users as well as for desktop or mac users.

Atari Breakout doesn’t work on my iPhone, how can I fix it?

No worries, we will make it work. First, I am going to need you to go to your iTunes store. Search for Google Chrome internet browser. Once the browser is installed, look up a few paragraphs above. There should be a tutorial with screenshots step by step. Follow that tutorial for Android devices. Yes I know, it is from Android phone. But now you have the same browser on your iPhone as I did on Android, to create this tutorial. You should follow the same steps, and you will be able to play the Google Atari Breakout game on your iPhone.

How to play this game

If you have never played classic Atari arcade game Breakout, the sole purpose of the game is to “destroy” or, as the name suggests, break the blocks using the ball. And at the bottom of the screen, you have a bar, which is the only thing you can control. Just from side to side and each time the ball is falling back, you need to put the bar underneath it. Whenever the ball hits the bar, it will bounce back and hopefully, and it will break another block. The goal of the game is obviously to break as many blocks as possible in hidden google games.

This game is easy to control, but unfortunately, the controls are not listed anywhere, so here they are!

If you are playing Breakout on your PC with Windows or Mac, you will have much more comfortable controls than if you were playing on a mobile phone or tablet or iPad. To control the bar, you can move with your mouse from left to right and vice versa. Or you can use arrows. Right and left arrow to be more specific.

If you want to pause the game, click on the pause button. In the case when you want to mute sounds, click on the button with a speaker icon. If you click on it again, it will turn the music on the back, the same goes for pause and play button.

On Android phones and iPhones

Playing google Breakout on Android phones and also iPhones is doable, but quite challenging. Again you have two options on how to control the bar. Either tap and hold on the screen and move from left to right or vice versa to control the bar. Or you can tap on the stop, where you want your bar to appear. Which works, but I do not recommend it.

When I play this game on my phone, I hold my finger on the screen, and I try to move with my finger under the bar, so I can see if I am moving the bar in the correct place or not. Because several times I was blocking my view on the bar with my finger, this is probably the most challenging part of this game when you are playing it on a smartphone.

Alternatively, you can connect mouse via Bluetooth to your smartphone and control it the same way as if you were playing it on desktop pc.

Why Google chose this name?

Well, the original game that they have used now as their secret video game was named Breakout. Which was and still is a game-changing arcade game in our video gaming history. Atari, Inc is responsible for programming and releasing this arcade video game. It is quite amazing how far we have come. This game was released in 1976. Which is ages ago, but if you compare it to games which are out nowadays? And also, now you can play this game just via google images search. But the original version of Breakout had only six rows of bricks. And you did not have four lives like nowadays, but instead of that, you were given just five turns to clear those walls.

The Breakout game we know nowadays and we can play on google images is the newer version that was implemented to Apple II, where Steve Jobs was also working on this project at the time with his friend Steve Wozniak. Before this game was being developed, Steve Jobs was an Atari employee. So yes, Steve Jobs worked for Atari Inc as a technician before he started working on Apple. But to be honest, he was working for them very briefly.

I hope I have shared with you everything you wanted to know about this google search game. Hopefully, you were able to play Atari Breakout on google images. If not, please contact me, and I will help you to set it up. If there is anything unclear in this tutorial, I will also try to correct that. Anyway, once I have more free time, I will also record my gameplay video. I want to share with you and other readers my high score on this awesome in the game.