Lauren Hashian is Dwayne Johnson’s girlfriend, they have been together since 2007, they’ve met during shooting a movie and fall in love, it is quite a coincidence since she is musician and songwriter and only played in one movie.
She was born on Saturday, September 8, 1984 on the same day was also born famous soccer player Peter Whittingham.

Dwayne Johnson and the love of his life

As I mention, they have started dating in 2007, which is already 10 years and they are still not married. But they have already two kids. Their first child was born on Wednesday, December 16, 2015.

Isn’t it intriguing that this couple is fit? Finally, a famous relationship where both of them are working out and are in shape. You can be fit too! If you are interested, read this.

Even though that Dwayne is not her husband, their first child has his surname, Johnson. It is a beautiful girl and they named her Jasmine. And now she is pregnant again and on Wednesday, December 32, 2017, they both went to the ceremony, where the Rock received his red star on Hollywood Walk of Fame. Everyone could clearly see, that she is pregnant again. Rock later told in interview, that they are expecting girl again. But you the rock, he is the 9th most followed user on Instagram, he will and also does everything for his fans, he has 97,169,784 followers and over 3 000 posts over the years. In which you can see insights into his life, movies etc. also crazy videos, how he randomly stops and take pictures with his fans or where he gives them gifts and hugs. On Tuesday, December 12, a posted picture of his first child with Lauren Hashian, which he called Jazzy instead of Jasmine, is expecting little sister. His followers once again were in the first place again and the rest of the world found out the news the day after. They did not announce any name yet, but they will figure this out for sure. Dwayne is a great father, he will have a third child and third girl, because he has already 16-year-old girl from his first marriage with Dany Garcia. By the way, her name is Simone.

Her age difference with her boyfriend, evidently isn’t an issue, since this baby, was probably conceived around her birthday in September when she celebrated 33.

Also, he made a joke, that he is surrounded by estrogen, not only with Hashian Lauren but two girls and soon to be 3. Which is quite funny, since in one of the most popular tv shows Ballers, where he plays a leading character he is impotent.

Well, let’s stop talking about her boyfriend and let’s get back to the chase. 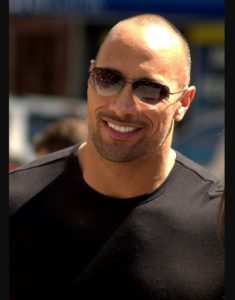 Well, I don’t know, it is not like she wasn’t famous before she met Dwayne. She is a very talented singer and writer. She got it from her dad, Sib Hashian, who was a drummer for a well-known rock band, called Boston. He also sang, but he was a way better drummer and that made him famous.
She released Singe Go Hard at the end of 2016 with Walter French. Also, her social media presence is off the charts. Her Instagram has over 260 followers with only 199 posts, which is very impressive (if you want to find her, her username is @laurenhashianofficial ). Also, her Facebook fan page has over 76 000 people following and also she is on Twitter, with 337 tweets, but only 4800 followers.

Also, we could see her on show R U That Girl, which was airing back in 2005 and was hosted by Tionne Watkins with Rozonda Thomas, it was a competition for musicians, but she wasn’t that lucky and did not win.
And her first born girl is definitely after her, here is a picture, where they are in Guitar center and little Jazz sat behind drums, like her grandfather.
To be clear, her songs count is only 1 and by that I mean published songs.

The Net worth of Rocks girlfriend

Her net worth is unfortunately unknown. But if you want to know, what Dwayne Johnson net worth is, please sit down… There were estimates in 2015, that his net worth is approximately 120$ million. But from our research, it is not very accurate, because his net worth, which could be googled is at the moment at 220 million dollars and in 2016 he earned over 64.5$ million and in 2017 ha made over $65 Million. He is the second most paid actor in Hollywood, only Mark Wahlberg beat him, with his 68$ Mil.

For people who don’t have time to read the whole article, here are answers to most frequent questions about Lauren.