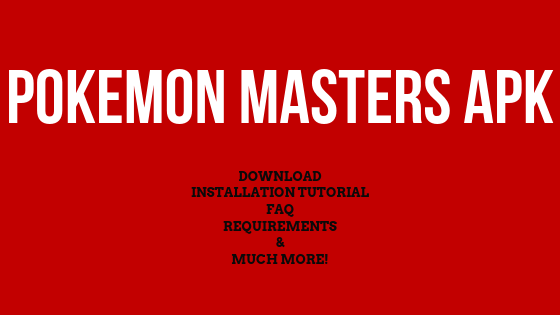 Currently, the newest version is apk pokemon masters 1.1.1, which was released just a few days ago. If you want to download this apk, click here to download. The apk file itself has only 81.18 Mb, but you will need more space on your device actually to install this game. And if you are wondering for which android version was this app made, it was made for Android 9.0 Pie, API 28. If your phone is running on this exact version and you have at least 4 Gb of ram, you will have the best experience from the game because it is optimized for this version of android. But that does not mean that on other or older versions of Android, you can’t play this game!

How to install pokemon masters apk

UPDATE, read this first! Some readers reported that when they clicked on the google play download link, they were told that they couldn’t download the game, because they do not live in the supported region. In that case. Go to google play and download any free VPN application. It truly does not matter which one you are going to get. Just install one and change your IP location from your real one to either Singapore or Canada. Most VPN apps won’t have Singapore as an option, but they should have Canada. Maybe try two or three apps, and at least one will have it.

After you have masked your real IP and cloaked it with VPN, go to google play or click on the link here and download the game. Once it is downloaded, install it still using VPN. After the installation is complete, you won’t need a VPN app. You can erase it from your phone, and now you are all done, and you can play apk Pokemon Masters freely.

Secondly, you don’t need to go to your settings and allow installing apps from unknown sources. This game, unlike Pokemon GO, is distributed by the original store, which is the Google Play store, which is for a change a piece of great news. You don’t have to be worried about downloading this game and allowing permissions for this pokemon masters apk because without allowing, you won’t be able to install this game. But as I have mentioned earlier, this game is distributed by the official channels. So I would not be worried about allowing these permissions.

This is mainly a co-op game. So the main aim of this game is to play three on three tournaments, which are held on Pasio, which is called the Poekémon Masters League. Find two other friends and try to become the best trainer or trainers of this league. If you are going to work together and act as a team. There is a high chance that you are going to succeed. Play more and reach the top places in the leaderboard. This is entirely a new game, and there is a good chance that you can make it.

In tournaments, try to learn with your friends the sync attacks. If you sync your moves altogether, you will perform the most significant attack possible. So far as this game is entirely new, not all the trainers do not know this, so at least in the beginning phases, this could give you the edge to win! But truth to be told, you can’t sync all pokemon together. You will have to figure this out before the tournament what pokemon should each of your trainers get!

Unfortunately, there has not been a released iOS version of this application. Once it is released, I will add it to this post and compare it to the android version to find out which one is better.

Is this better than Pokemon Go?

Well, it depends. Gameplay vise if you are playing with your friends, then, in that case, this is a way better game. In Pokemon GO, there was almost none of the co-op like in this game. Also, the graphics are way better than any other pokemon game or Pokemon Go for that matter. Even the map is more extensive than I have expected, several types of terrain, and many more things are added to this game. The background music is OK, but the sound effects, especially during battles, are amazing, I was impressed by that. The only thing I miss is the old soundtracks, which could play in the background, but they don’t. But no hopes lost, they can always add this in the next update.

Yes, this game is free to play. But on the other hand, if you spend real money within the game. You will see progress so much faster than players/trainers who do not.

In that case, there is the issue with IP again, which is weird, because only a few people are experiencing this issue. But in that case, reinstall the VPN application you have used to download this application, and you will need to change your IP to Singapore or Canada again. Once this process is done, keep the VPN enabled and finally launch the Pokemon Masters application and play & enjoy!

This is probably the best Pokemon adventure game that was released this year. There are several new islands in this game, which are waiting for you to be explored by you and take you to the next adventure. Overall I can recommend anyone who has an android phone to get this Pokemon Masters apk. This is the best adventure and also co-op game for android devices that was released in 2019. And I highly doubt that in the upcoming year will be released better game than this. My prediction is that this game will be in the top 10 most addicting games soon.

PS: If you are wondering what other games I play regurarly I also play Minecraft Education Version.