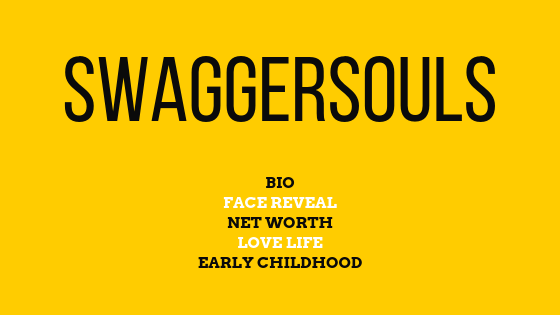 I know that a lot of you visited this article due to the Swaggersouls face reveal. And don’t worry, the photo is here in this article as promised. But I would like to briefly sum up his bio for people who are not aware of who he is or who want to find out more about him than just his face.

Even though Swaggersouls is one of the most famous YouTube gamers of this day and age, I am sure a lot of people have no idea who he is. But if you ask severe CS: GO gamers who he is, there is a good chance he will be in TOP 5 of their favorite players. He is predominantly known for CS: GO gameplay videos, but lately, he has been steering more to the VRChat. To explain why this guy is such a mystery, he is always wearing a knight helmet.

His fame does not end on YouTube. He is also a well-known Twitch streamer where he has recently crossed 450,000 followers. This is amazing, but nothing in comparison to 3,700,000 subscribers on his YouTube gaming channel. These two are not his only business ventures. He is also a member of a top-rated podcast called Misfits. Misfits are a group of five young guys. And it does not end there. He is well known on Twitter with more than 758,000 followers, and a little over 837,000 followers on Instagram.

But to answer the question about who he is. He is not one of the best gamers on this planet. But what he is, he is a great comedian. All his videos are more from a comedic angle than from a pro-gamer point of view. If you have never seen any of his videos, I highly suggest you watch some of his most viral videos or some compilation of his best moments.

The early career of Swaggersouls was in early 2015, where he uploaded his first CS: GO video to YouTube. Which might seem like ages ago for some of you. But he was a gamer ever since he was a child. He was gaming since the early days of Runescape. He started at the end of 2005 or in early 2006, where he was playing Runescape. Following year he switched the games and started playing Maplestory, which he had played for several years now. Even though he spends most of his time on counterstrike and VRChat videos. He experienced the most amount of growth of his social media following during playing Original Legend of Zelda.

There is very little info about Swaggersoul’s life and childhood. But I have tried my best to dig up as many things as possible. But what we know for sure is his name, Eric Vivian Matthew, aka Swaggersouls. He was born in the United States of America, and he is currently living in Idaho, where he also grew up in Zeetsville. There is zero information about where it comes to his parents or even his education. He hid it truly well.

SwaggerSouls, whose real height is unknown and other body measurements are not available as well. One time he tweeted that his height was 4 feet 20 inches but there was a long argument among fans about the truthfulness of this statement; then later again on another tweet SwaggerSouls stated has a perfect height of 5 feet 8 inches asking people to stop arguing with him over these topics. Other than this one thing it seems all else related to SwaggerSouls is still shrouded in mystery such as hair color or face reveal which could be false due to some who say they know what looks like being certain it’s fake.

Is Swaggersouls the most interesting and creative person you know? If so, then answer this question: How old is he anyway? Well if we are talking about his height in meters than 1.7 m for 5’8″ which converts to 68 inches or 173 cm for someone at a higher level of education like him; they would have been born on October 2nd, 1995.

This is not the first time when a famous YouTuber got a lot of popularity and excitement because he did not show his face. We have seen this story quite a few times. But again, he scored well with it. He titled the video The Face Reavel by Swaggersouls. This video blew up and had over 7,500,000 views. Of course, he did not show his face in that video. He even said that there are some things better off not knowing, like his real face. But he barely showed them his both eyes for a second.

All of his fans want to see the real face that is underneath the mask.

This has happened several times on the YouTube gaming scene or even on YouTube in general. In his reveal video, there are countless faces displayed at the end of the video. And one of those is his. And this is when the internet comes into play. Hundreds of fans compared his eyebrows and eyes to the faces, which were displayed in that video. And guess what? They found a match, and they even agreed on it. So finally, what you have been waiting for, here is the face reveal of Swaggersouls.

What makes him such a special gamer? Well, as I have said earlier, his comedic spin on gaming is unique. Plus, the excitement that no one knows who he is or how his face looks. And on top of that, PewDiePie worked with him on his face reveal video, where he was pretending that he is him!

Swaggersouls net worth estimates which are online are all quite off. In most articles, they claim that his net worth is around 300 thousand dollars. Which, in my eyes, is way off his real net worth. I mean, I know what kind of CPM rates I had on twitch and also on YouTube. Also, we should take into account that on Twitter and Ig, he has almost a million followers with high engagement. Most gamers could dream about the engagement he gets on his posts. He can quickly make a promotion on his social worth five to six figures. And on the views combined on youtube and twitch, he made a lot more than $300,000. He should have way more even after taxes.

But at the end of the day, the real net worth does not matter that much. Hey, he is a 25-year-old guy, even if the net worth was half of that. It is an incredible achievement at such a young age! Plus, he has a good head on his shoulders, only he hides it with a helmet quite often.

This is all what we know so far about Eric Vivian Matthews.