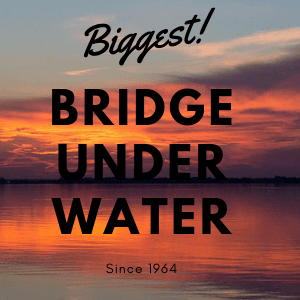 The first bridge underwater was built in the early 17 hundreds. Of course, it did not survive until now. There were many attempts to make another one in the 18th and even 19th centuries, but all of these projects failed! And many people died during the process.

The construction began at the beginning of the year 1960. But the work on this project started over 20 years earlier. Johnson was working on this concept since his late 30s, and this was his baby. And finally 20 years and some later this project is coming to life. They estimated that it would be built within four years, which is quite a crazy estimate in today’s standards. But at that time, thousands of workers were on this job, so at the time, the forecast seemed possible.

The Chesapeake Bay tunnel is almost 30 kilometers long. If the tunnel continued by a straight path to the other bank, the tunnel would be half shorter. Maybe even more. But to be honest, we would not be able to build it in this day and age. And for sure not 55 years ago, let alone 75 years ago, when they started working on this project.

The reason for that is that they have to found soil in which they could build it up. And that soil needs to meet specific criteria, which is a good thing since thousands of people travel through this bridge-tunnel every day for more than half a century. That is the main reason why the tunnel is over 28 km long and curvy. If they took a straight line, they might have saved over $100 million in construction fees, and every driver would save more than half a bill on petrol. But if they would not do the way they did, they wouldn’t save lives, because this bridge would be a ticking bomb in that case. It would be only a matter of time when this bridge would collapse and kill thousands of people in a matter of a few seconds.

This photo was taken just a few minutes of walk away from Chesapeake Bay Tunnel-Bridge. So if anyone tells you how this ruined the surrounding environment is straight out liar. Btw: if you are in this area during the fishing season, you should go fishing, I have heard great stories about this place.

What is the hardest part of building a bridge underwater

The hardest part of constructing a bridge underwater is finding out the densest soil under the water. If you fail to do that, you can’t build one. This is the main reason why all the builders from the 18th to 20th century failed.

Almost at the end of 1964, the construction was done, and Chesapeake Bay Bridge-Tunnel came to life! Even though the development cost nearly $50 million more than was their estimate. They made it in time, and $200 million investment was well worth it because the tunnel is still working now in 2019.