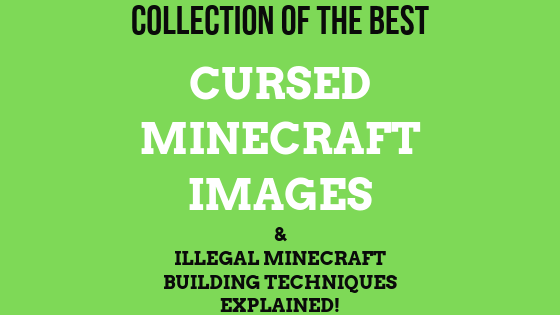 Cursed Minecraft images, which are known only by the hardcore Minecraft gaming community as illegal Minecraft building techniques. These are compelling images of certain Minecraft items or objects for that matter, which you can’t usually find in the Minecraft game. These have to be either faked in photoshopped or edited by game mods.

I will briefly explain how and when these images started for those who are unaware and right after that, and I will show you the best-cursed photos, that were ever posted online. So if you want to see them, skip right below to the images section of this article.

They started early January in 2019 when the famous Redditor posted an image of Minecraft torches, which were only placed in one block. This does not sound that crazy, but you can’t build this in the original Minecraft game. For this to happen, you either have to edit mod of the game or straight photoshop that picture. This picture has been reposted in many subreddits, and in some, it has received over several thousands of upvotes.

This is the Minecraft Cursed Image which I am referring to:

This is how Minecraft Cursed Images phenomenon have started. Was this illegal game building technique or straight photoshop editing? #Minecraft #cursedminecraftimages #minecraftimage pic.twitter.com/bGEjbt1JLn

Ever since the first viral post of torches, people started editing and creating more of these pictures and posting them on Reddit and other social media sites. At first, they were referred to as illegal Minecraft objects. And later on, a term cursed images have picked up for whatever reason. I wasn’t able to backtrack that. But ever since April 2019, I was mainly seeing people refer to this trend and these types of images as cursed ones.

Here is the best and most significant collection of Cursed Minecraft Images that you can ever find. Enjoy!

I hope that you have enjoyed these pictures, some of them were created by editing the mods in Minecraft and the textures. But quite a few of these are also heavily photoshopped or even modified in Microsoft paint software.

Zombie post-apocalyptic photo from Minecraft. Is this Cursed Minecraft Image or not? Do you think that this one was made in photoshop? #minecraft #minecraftgame #minecraftcursedimages

How where these Minecraft cursed images created?

No one, but the creator knows. But if I had to bet if they were created in photoshop or some other photo editing program or they were created by mods and edited textures in the game. I would bet that the vast majority of these and online other pictures were created by some photo editing software since Minecraft does not have high-quality graphics. It is way easier to edit these kinds of things after you take a screenshot of the game. But then again, it is not as hard to edit or create a new texture and add it in the game or replace the “original” texture. So with that being said, I would say over 70% of these pictures were created quite quickly and easily in photoshop or similar software.

I hope that you have enjoyed all of the cursed Minecraft images. Hopefully, none of them will make you scream. My only hope is that you have laughed and maybe at times wondered how it was done. If you have any other cursed/” illegal” image, please contact me. And if it is a high quality one or a funny one, I will re-edit this article, and I will add that image to the rest of them.