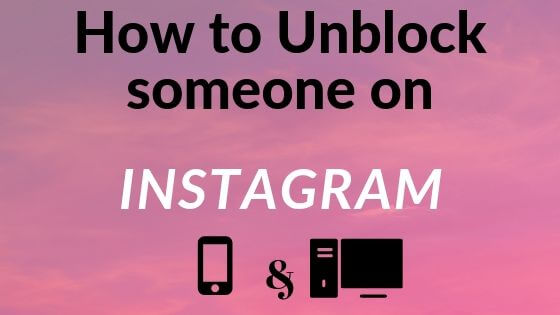 If you for some reason blocked someone on IG, and now you are wondering how to unblock someone on Instagram. You have landed on the perfect article. I will show you step by step, how to do that both on a computer or mobile phone. This is a straightforward process, that can take you up to 2-3 minutes. You won’t need any password or what so ever.

How to unblock someone on Instagram in 9 easy steps:

As you can see, it is quite easy to unblock someone on Instagram, but if you would like to do this process on your computer rather than on the phone. I will show you also a tutorial for that. I get it, and if this too was not enough for you, I will put screenshots step by step on how to do this also on your phone.

How to unblock someone on the Instagram app with screenshots

I will show you here the two most common ways, how you could unblock someone easily.

Go to your profile

Right after you open your IG app, tap on the icon of the human in the right bottom part of your mobile screen. This will lead you to your IG profile.

Go to the menu

If you are in your IG profile on your app, you should see three lines underneath each other. If you tap on that, it will lead you to a menu.

On the bottom part of the screen, you should see settings, tap on that if you still want to unblock someone.

This is pretty much straight forward.

If you tap on blocked accounts, it will show you all Instagram accounts that are currently blocked by you.

Under their profile picture should be a blue button “Unblock” and tap on that.

If you are sure, tap on Unblock to unblock that person from your Instagram

This is the last step, by this you are just confirming your decision, and right after this, the person will no longer be blocked by you.

How to unblock someone on Instagram application method number two

This one is pretty straight forward, and right after this, I will share with you 101 guides on how to do the same on your computer.

If you want to unblock someone easily on your Instagram app, you will need to know their username. In case when you don’t know the username, you have to either google that person. If, for some reason, that user won’t appear in your Instagram search. You will have to either follow the tutorial for the desktop unblocking or copy the URL link to his profile. Open it in your browser on your phone. Also, it should ask you if you would like to continue his profile on your app. If not, you have to use a tutorial on how to do this on your computer.

This bug with search happens only to some people for some unknown reason.

Once you are in the profile of that account, you will have to tap on unblock, and then confirm it. You will have to do the last three screenshots from the previous tutorial

How to unblock someone on Instagram on a desktop

If you are unable to access your Ig app, don’t worry. You will be able to unblock on Instagram even od desktop pc.

Unfortunately, the desktop version of Instagram does not have the same menu available, as is in the app. This is why I have started with how to unblock on Instagram on your smartphone. Because if you don’t know the username of that person, you won’t be able to do it on your PC.

Some users have reported that Instagram won’t let them search for that blocked Account on Instagram. In that case, you will need to google that account and copy the URL to that profile. Alternatively, ask a friend to find that account and send you a link.

Once you have finally landed on their Instagram profile, you will see a blue button with the text: “Unblock,” click on it.

Now you should see a pop up with a button with the text: “Dismiss.” Click on it, and after that, you will have that person unblocked again.

Now you should have finally unblocked someone on Instagram app or desktop if you have any other questions regarding Instagram or any other social media platform. Just contact me, or go right ahead in the comment section below. Also, I will try to create a tutorial to fix your issue.

If you happen to block someone who has a private account on IG, it will automatically remove your following to that particular account. Once you unblock that account, you will be no longer following that account. And to follow such an account again, you will have to follow him back again. Which means that the user will receive a notification about it. However, hopefully, that user won’t figure out that you have blocked him in the past.

Now you should know all the methods on how to unblock someone on Instagram. If anything from this tutorial has been unclear to you, please contact me via email or comment section below, and I will try to fix that. Hopefully, this tutorial has helped you. Also, just a reminder if you block or unblock someone, they won’t receive any notification about it. So do as much blocking and unblocking on Instagram as you please.