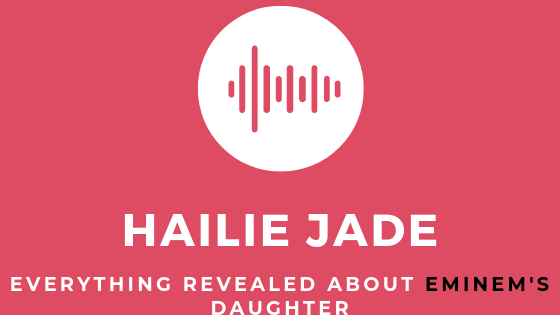 Hailie Jade Scott is the girl from Eminem songs, yes you guessed right. She is his daughter. If you want to find out everything there is to know about Eminem’s daughter, read her biography here.

my kind of thirsty thursday 😋🍓🍌

Eminem’s daughter’s full name is Hailie Jade Scott Mathers, who just have graduated from Michigan State University. She is most known for being Eminem’s daughter and form his lyrics. She was born at the time when Eminem was not yet famous, and he was struggling with his hip-hop career. It took him three or four more years after she was born to blow out. After that, he was the biggest celebrity in the hip-hop industry. Even though during her young age, her family had financial stability. She did not have a carefree childhood. Her parents had a violent relationship with each other. She was mentioned in early Eminem’s career in tracks Hailie’s Song and also in Mockingbird.

And even from these two tracks, you can kind of judge, that her childhood wasn’t easy going. But even after those two tracks, he continued to use her name in his lyrics. Truth to be told, her parents did their best to give her a normal upbringing. And I don’t want to judge her early on. But it seems she grew up ok at the end. Hailie recently becomes one of the most popular Instagram influencers with over 1.7 million followers and quite a few thousands of followers on twitter.

Eminem and Kim met each other when both of them were still in high school, and Hailie was born almost nine years after that. Their relationship started when Kim and her twin sister were staying at Eminem’s home. Just four years later, Kim and Em got married, but we all know that the marriage lasted for only two years. They got back together in 2006 and got married, but they divorced in less than three months.

Hailey was growing up with Alaina Marie and Whitney, which was Kim’s daughter from a different relationship. Luckily Alaina Marie, alongside Whitney, was adopted by Eminem.

Her childhood was rough. Kim and Em had a horrible relationship. They split up just after one year after she was born.

Unlike most children of celebrities, Hailie was not homeschooled. And thank god for that. She was studying at Chippewa Valley High School in Michigan, which is an excellent school with a good reputation. She was a member thereof the National Honor Society, and she was playing volleyball at their school team. After graduating high school, she got accepted to Michigan State University. This was a great choice, and she has a degree in psychology from Michigan State University.

How she got famous

Even though she was well known as a child, from the reports and interviews, she has quite a normal childhood. Her first mention in Eminem’s lyrics was when she was seven years old when Eminem released Hailie’s song in 2002. In this track, Eminem describes how he gained custody back of his daughter and what a mess he was at the time.

Two years later, Eminem released track Mockingbird, which is also about her. This track is quite different than the previous one. Eminem is expressing his regrets for not being the dad he would like to be. He even showed love to her and her mom Kim. Despite all the hate, history, and bad things that happened between them.

And just maybe, we will know a lot more about her. She recently posted on twitter that she is thinking about creating a brand new youtube channel. To vlog and share her life with us. Hopefully, she will pursue this idea.

Other songs she was mentioned in

In all of these tracks, he either mentioned Hailie specifically, or his lyrics say his baby or babies. So, of course, not all of them are dedicated to her as Hailie’s Song, but she was his inspiration for most of his tracks, at least slightly.

But there are just a few genuinely great songs for both of them. For example, in track, My Dad’s Gone Crazy is used her real voice. A few years later, after this song was released, she came clean. And she said that her dad came to her, and they were both working on this song with Dr. Dre.

Hailie Jade Mathers’s net worth is reported at $1,000,000, which, if you ask me, is an excellent success for a 23-year-old entrepreneur/influencer.

Eminem’s daughter has been dating for quite a while. Currently, she still in a relationship with an ex MSU student. She has been with him for more than three years now, so his name leaked. Her boyfriend is Evan McClintock.

Hailie with her boyfriend. They have already celebrated three years together. Everyone who speaks about them has only good things to say about them. They seem genuinely in love with each other. And Evan should know to behave well because no one wants a harsh diss track from Eminem!

Relationship with her dad

Even though that Hailie Mathers is his only biological kid, she has two half-sisters called Alaina Marie Mathers and Whitney Scott Mathers. Both of them are half-sisters through their mom Kim Anne Scott.

It is quite interesting that in interviews, he is ducking all the questions about his daughter/s, but he doesn’t have any issues to write lyrics about her.

Even though she does not pursue this career. She is a beautiful young lady, and she gets approached quite often to shoot movies or at least music videos.

Her first appearance was in 1999 in Limp Bizkit’s video clip break Stuff. A few years later, she has appeared in Eminem’s documentary called: Live from New York City, and the same year she was in his music clip Mocking bird. It took her 11 years to have another appearance. In 2016 she was on Luc Turgeon’s Channel in the first episode.