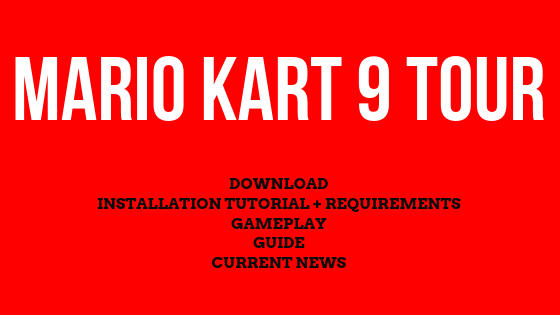 Finally, the time has come, and Nintendo is finally releasing Mario Kart to iOS and also for Android devices. The release of Mario Kart Tour [9] is September 25th for both Android and iOS smartphones and other compatible devices. Mario Kart 9 for mobile devices is going to be free to play a game, which should have the same depth as their regular racing franchise releases.

Have you ever wondered just how far you can glide in a single go? #MarioKartTour has special Bonus Challenge courses like Glider Challenge! Spread your wings and prepare for the game’s launch on September 25th! pic.twitter.com/YjSrjvqM6w

How to download Mario Kart iOS and Android Apk – Tour 9

The game is not released yet, but for those players who would like to play Mario Kart 9 Tour as soon as possible. There is a way how to make sure. You will be one of the first players of this game on a mobile phone. You will need to pre-order the game from iTunes or Google Play, which is going to depend on which I kind of phone you prefer to play. What is weird but at the same time, exciting is that you will also have to have a Nintendo account to sign in and play.

How to install this game

Since the game is released on both Android and iPhone and other iOS devices on their official app stores, you do not have to allow unknown sources to install this game. The only thing you have to do is to enable several permissions for the app before actually installing it. Other than that, it should be a straightforward process.

If you have a new smartphone, you probably won’t need to check these, but those of you who have an older iPhone or iPad or cheap Android phone, you should check these if you can play this game on your device or not.

To play this game on any iOS device, you will have to be running on iOS version 10.0 or newer. If you are updating your iPhone regularly, you should be able to play it on any iPhone that is newer than iPhone 5s, on which you can also play this game.

And for those of you who are running their iPads or iPhones on iOS 13.0, I have great news. You will be able to connect your Xbox One or Playstation 4 gamepads to your iPhone or iPad and play Mario Kart with that controller. I don’t know how about you, but this is a significant step forward for mobile gaming. Because it is quite hard to play this game without a controller for several hours, now you can!

Is this game going to be available on Apple TV?

So far, there has been a lot of speculation. There is still some chance left that they are going to enable this game for Apple TV devices. This seems like a no brainer, but let’s don’t forget that Super Mario Run was also optimized for both iPhones and iPads, but they left Apple TV unavailable for this app. Hopefully, that is not going to be the case with this game. But right now, there is nothing we can do. We can only wait.

So far, it has not been confirmed if they will also enable for Android version of this game to connect the Xbox One and Playstation 4 gamepad. But I am sure that if they do not allow this officially. There is going to be a way how to do this on Android.

This mobile version will have similar courses as the beta version and of course, a few more. So far, we know that this game is going to contain the following courses.

How to control a Mario Kart iOS version & Android one

Before you can play, you must register a Nintendo account, which you can do here.

After you have signed up, you can launch the app on your mobile phone, log in, and now you are finally ready to play.

Both of these versions of this game will have the same controls. To speed up, you will need to touch your screen and hold it there. For moving left to right or vice versa, you will have to proceed with the finger on the screen. The game seems super easy to use, unless you have 6 inches or bigger screen, in that case, it is kind of hassle to control the kart.

New York, Tokyo, and the Parsi course were not in a beta version of the game. But Nintendo has promised to release such real-life city-inspired courses. They will be available only during specific times, so far we do not have any more information about that.

So far we know also about several playable characters, so now these are confirmed already:

This game is again going to be slightly RPG based. Because you will be able to collect and unlock new characters. And not only that, you will be able to unlock better and faster karts, gliders and many more. Just wait till September 25th if I find more news till then I will report it here for you.

Is this going to be completely free to play game?

Unfortunately not. This game is going to be free to download and free to play. But Nintendo has to make money somehow. There will be in-game purchases. You will be able to buy packages or in-game currency in exchange for real money. I am sure that this game is going to offer a lot of these in the range from just 99 cents to a hundred dollars or maybe even more. We will have to wait for this to find out!

I am so glad that Mario Kart will be on iOS and Android. I have to admit I was waiting for this for several years. I have even played non-original Mario Kart on iPhone once, and let me tell you. It was terrible, but this time we have an official release from Nintendo itself, I can’t wait for this game. When they finally release Mario Kart Tour, there is a good chance I won’t blog for a few weeks.