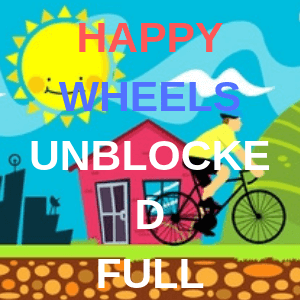 Happy Wheels Unblocked is, by far, my favorite online game. This is one of the main reasons why I am sharing this unlocked version with you. For those of you who were searching just for unblocked games and stumbled upon this, click on “unblocked,” and you will be redirected to more unblocked games. This is a quite big online flash-based game. Unlike other flash games for this, you need decent tech requirements to run games like this. The main objective of the game is to finish the map/level, with anticipating physics within the game. To control your vehicle accordingly, you will have to have a lot of patience. Jim Bonacci, the programmer of this game, released the full version back in June 2010. Within the same year, was winning votes in several magazines as the best free online game.

In 2010 when this game was published. It was quite simple. No one blocked games like this at work or school. Nowadays, managers are smarter, and they usually block social media and these types of sites, because their workers spend a lot more time on these games and social than on their actual work. But don’t worry, that is where we come into play. Later down this article, there will be a link to Happy Wheels unblocked full version of the game, so you can finally play!

You can play the Full Version Here:

In the demo version, you can try this game for free. You are only limited to specific maps and only certain vehicles. By maps, I mean levels and by vehicles. It is mostly bikes.

Characters in the demo version

Pc users need at least win XP with the latest version of adobe flash player available for win XP. Min 1gb of ram and at least 1core CPU with 1.5 GHz or more.

As far as I know, this game works on every MacBook. (2005 and newer) Android users need to have at least 1.5 Gb ram and android 4.0 or newer.
Similarly, iPhone and iPad users need at least a device with iOS 5.0 or better.

How to play Happy Wheels unblocked

This game doesn’t need a tutorial. It is quite a simple game. In the beginning, you have to choose your character this 2d game. You will have to through the whole map without any crash. Which is quite hard, because each level/map has several obstacles that you need to avoid or avoid falling from these.

All the characters have the same controls in unblocked Happy Wheels game. Button up/Arrow up will accelerate, Arrow down/button-down is for slowing down and reverse. Left Arrow is for leaning to the left side. And with the right Arrow, you lean to the right with your character. With the keyboard “Z,” you will eject. The space button is for the first action, and ctrl and shift are for performing subsequent activities. If you use Z for ejection, you will also have to use arrow buttons to move the body, and for grabbing, you will need to use the space button.

Few tips on how to perform better

Yes, within this Happy Wheels unblocked version, you can create your map. If you go to the menu and choose “expansive level editor,” you will create your map with your obstacles. However, you won’t be able to share this level with your friends, which is quite a big downside for me. It will be only saved on your profile, which is the letdown.