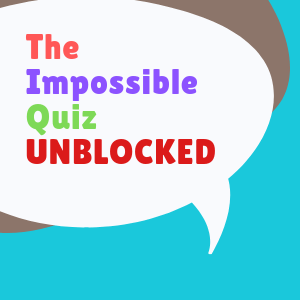 Finally, I can give you access to the Impossible Quiz unblocked. I have been playing this game for years now, and I still enjoy playing it. This game is quite exciting because it is not only fun, but you also have to use your brain to win the game.

If you are not a geek into a game like I am, then you probably won’t know the nickname of the creator “Slapp-me-do.” He released the impossible quiz in 2007, and a few months later, the game was unblocked due to its popularity. The issue with this game was that Slapp-me-do used copyrighted music within this game. That is the main reason why they have created an unblocked version of the game because, officially, the game had to be taken down due to copyright issues.

You can play the game here without flash playewr:

Even though there were facing these severe issues, two years later, in 2009, they have released the second version of this game called the impossible quiz two unblocked. This game was again a huge hit, and it is also available on iPhone and Android phones.

Btw: If you are frustrated by playing this game, try this one instead to calm your nerves and then come back to this game with a fresh mind :).

The little back story of how this all happened

If you ever wonder why this game is so good. The first version of this game was released in late 2004. The game was called differently, and there were only 30 questions in total. The programmer of this game was still studying college at the time. After that, he “released” another beta, which has contained ten more questions. I have searched for this original game but without any luck. Anyway, three years later and this game was finally released.

I know that three years seem to be quite a lot for a game, which you control only with your mouse. There are no unique animations, and the game is not even 2D. But keep in mind that optimizing the game to be lightweight so even bad computers can access it. It might seem funny nowadays. But back in 2007, there was still a ton of pc users who had one core CPU with 512 Mb of ram. And I know that now in 2019 99% of readers who read this article have a better phone or maybe even better hardware in their smartwatch, but that wasn’t the case 12 years ago.

How to play The Impossible Quiz Unblocked

The gameplay of this game is quite smooth. This game contains a series of hard and complicated questions. Most of the items are quite hard. Some of them can be solved via logic, but that is probably just only 1/5 of the questions.

Every round, there will be a new question for you waiting. Each question will show you also four options you can choose from. If you think you know the right answer to this quiz, click on it.

Which question is the hardest one?

Well, that is quite different for every player. But most complaints, and even most searches for the correct answer is for question number 42. Also, on the sites where they discuss the exact question they don’t honestly know, the right answer themselves is. And I have to be honest, and this question was quite challenging for me too. I have lost the game several times due to this question.

At the beginning of each unblocked round of the impossible quiz, you will have three lives. Whenever you answer incorrectly, you will lose one of your three experiences. When you choose the wrong answer again, you will live another life. If this happens three times and it doesn’t have to be three times in a row, just three times in total, the game is over for you. Every time this happens, you will lose all your progress, and you have to start from scratch again.

How to win The Impossible Quiz Unblocked game

The best tip is to use skip options on the bottom side of the screen there is a skip button within the game. But if you skip the question, the same question will show up later during the game. Well, not all of them, but there is a good chance that if you don’t know the right answer, that you will face the question again. But yes, some questions are entirely skipped able. But please keep in mind that you have a limited amount of skips per game. Within the game, you will slowly earn skips, and you can use them after that. But the maximal amount of skips that can be gained during the impossible quiz unblocked play is in the total count of 7 skips, which is not that much. Use them wisely!

If the game wasn’t hard enough, in the second update of the game in late 2007, they have added bomb features. Some questions randomly will have a bomb timer. The timer will be in the range of just seconds up to 11 seconds. If you don’t answer within that time limit, the bomb will explode, and guess what, and this will be another game over for you.