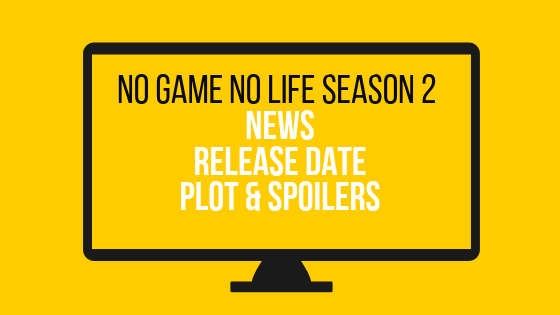 Ever since No Game No Life season 2 rumors started, I was trying to find out news and spoilers every day. Season 1 was such a beast for me, and I loved every single minute of it.

Renewal status of No Game No Life

It is September 2019, and season two was still not announced or denied. Madhouse studio so far did not release any concrete statement that the second season will be released. But the reason why everyone is expecting season two of No Game No Life is that in anime A Place FUther Than THe Universe had a poster for the second season of No Game No Life. That is why we have our hopes up that they will continue to release new episodes.

More reasons, why we should not lose hope

If Madhouse studio stopped completely working on this anime, I would lose all my hopes to. But they have released No Game No Life: Zero, which is a prequel movie to this anime. And there is enough content to create new 24 episodes for season two. There are six more volumes still available. With that being said, I believe there might be enough content even for No Game No Life season 3, which is a stretch, but it could work.

Also, the history of Madhouse says to us that there is a good chance that they will continue with this anime. Why? They have released Overlord season 3. What it has to do with NGNF? Well, Overlord season 2 had way fewer sales than the first season of No Game No Life.

Do I think that they will release the new season?

The plot of No Game No Life Plot

No Game No Life anime series is about two step-siblings. Who previously challenged a dangerous rival. This sounds intimidating, and it was, but they were undefeated duo until that point. But what they did not know at the time, that the serious rival is Tet. Tet is a god from a different reality. As a result of that challenge, they ended up in a new world that focuses only on games. In this new world, every dispute or challenge is solved with a tournament. This exciting but straightforward rule allows zero violence and injustice in the modern world.

Both the prequel movie and the anime shows were exciting until the end.

Who will be in season two?

These are the characters that will be for sure next season if they release it.

Release date of No Game No Life Season 2

Unfortunately, I have no date for you. MadHouse studio so far di not release any decision about renewal, but once they do, I will update this article for you. Stay tuned for more updates. Please bookmark this page to be one of the first to find out about the new season. But I believe there is a good chance that season two will come out before the end of 2020.

Rumors about Season Two Being Canceled due to plagiarism allegations

The artist, to my knowledge, received an apology from Kamiya and was paid very well. There is no reason why they would not release the following season. The artist was compensated very well. And let’s think about this for a brief moment if these rumors were true. There would be for sure an official statement released by MadHouse studio that they are canceling the second season.

Spoilers for the upcoming season

In the second season of NGNL, the storyline will start with Shiro and Sora, who are going on a beach vacation at Werebeeasts’ Eastern Union. During their vacation, they get a visit from Plum. Plum is the only remaining male Dhampir on Disboard. A dhampir is a basic combination of succubi and a vampire. Dhampirs are very weak during sunlight and can’t face the sunlight for an extended time. They live off of soul essence that they suck out of other races. Each Dhampir who wants to reach adulthood must bite a willing human or person and drink their blood.

But Dhampir lives now in the new world, where he can only get soul essence and blood if he wins game or challenge. This makes Dhampir’s life extremely difficult. And Dhampir females have a tough life in the new world also. They can reproduce if they win games/challenges.

The situation is hard for every Dhampir, even for Plum. The entire species of Dhampirs are now facing extinction in the new world. Plum is currently surviving of licks of sweat from Shiro’s foot. Yes, Plum is part of team Blank. They are all excellent elite gamers. But their opposing team, Sirens, finally found their weakness. Team Blank is horrible at dating sim games, and this is not an exaggeration, they are freaking terrible at those.

Plum is playing a significant role in dating sim games because, as a Dhampir, he can use a variety of magic. He can create love potions, shapeshift, and able to create many more deceptions.

Luckily Sirens have no clue what is the exact formula to win the game either.

I should probably stop here. Otherwise, I will spoil the whole No Game No Life season 2 for you!

As you probably find out from this article, I am a massive fan of this anime show. And even though that is true, I am a realist. And from the information, I have gathered and shared with you. I am very optimistic that MadHouse Studio will release one day, No Game No Life season 2. And it will not be that far in the future from now. It makes sense due to the enormous fan base and also to the performance of the prequel movie and even the first season, which was very successful. Don’t worry, binge watch the first season again, and soon, I will have a release date for you! Don’t forget to bookmark this article to find out about new updates as quickly as possible.